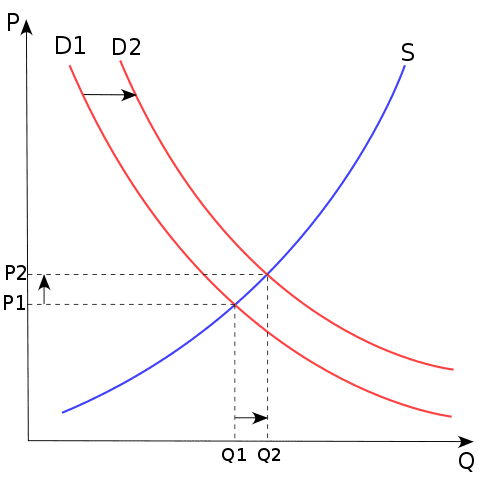 According to Wikipedia the law of supply states that assuming all other factors are constant, an increase in the price of items supplied leads to an increase in quantity supplied.

According to Wikipedia the law of demand states that assuming all other factors are constant, an increase in the price of items leads to a decrease in quantity demanded.

One of the major problems in public education in the U.S. is the shortage of science and math teachers. Could we explain this shortage using the supply and demand model?. We might, if we recognize the supply for teachers depends on the opportunity cost for working.

Remember that everything has a cost. The opportunity cost of your time working as a teacher is the salary you could make working somewhere else. Therefore, the larger the salary you could make working somewhere else, the larger your opportunity cost of working as a public school teacher. Salaries in math and science are usually higher than salaries in other disciplines such as humanities and the social sciences. Therefore, a person with a degree in math and science typically gives up a much larger salary to teach than a person teaching in a different discipline.

Use a supply and demand diagram to illustrate how this higher opportunity cost for math and science teachers creates a shortage of them.

Where did all the farmers go

In the 1950’s about 17% of the labor force in the U.S. worked on farms. More than fifty years later, in 2004, that percentage was only 3%. What happened? Why did people stop farming in the U.S.? One explanation has to do with increases in productivity in farming.

Use a supply and demand diagram to explain how increases in productivity in farming creates an incentive for farmers to leave farming.

Increase in productivity implies improvement in technology. This results in a right shift of the supply curve. It means that at the same price the quantity supplied is more, which implies that the cost of production decreases. A decrease in cost of production means that laborers are payed less. Hence fewer people will want to work on farms.

A lower cost of production implies it costs less to produce and hence the price of items sold by farmers would decrease. A decrease in price would mean farmers will earn less income. Hence they would be encouraged to leave farming.

Why are people moving back downtown

In the U.S. people are moving back downtown. Cities such as Chicago have seen a boom of residential real estate development in their downtown areas. Take a drive around the South Loop (as the south part of Chicago’s downtown is known), and you will see plenty of building cranes. Why is this?

Interestingly enough, one reason may have to do with the increase in online shopping. As people continue to get their shopping done online, large retailers have been closing their stores in the downtown areas. This has increased the availability of real estate in those areas.

Use a supply and demand diagram to explain how the increase in online shopping has created an incentive for people to move back downtown.

An increase in online shopping would mean there is less demand for retail shops. As a result the prices of items sold at retails shops will increase. This will further discourage people from buying from retail shops.

An increase in residential buildings usually means a decrease in house prices. A decrease in price results in an increase in quantity demanded. So more there will be more incentive for people to move downtown.

For the last 40 years, the U.S. has been fighting a war against illegal drugs. The major targets have been marijuana, cocaine, heroine, and, most recently, new drugs such as ecstasy and meth. The goal of this “war” has been to reduce the supply of these drugs coming to the country by either seizing the drugs or by incarcerating those involved in the illegal market. Paradoxically, many argue that this increase in enforcement has led to an increase in the crime associated with the use and distribution of these drugs. Why?

Why has the price of oil increased in the last 10 years? Or has it

In 1994, the average cost for a gallon of gasoline in the U.S. was $1.21. These days, the same gallon of gasoline goes for about $3.40. On the one hand, we could explain this increase in price to a larger demand for gasoline, particularly from rapidly growing countries such as India and China. On the other hand, if gasoline was, in fact, so expensive, we would see smaller and more efficient cars on the street, but we have not.

Use a diagram of supply and demand to explain why people in the U.S. are driving larger and less fuel efficient cars today if the price of gasoline has continued to increase.

An increase in cost of gasoline, would mean that it costs more to produce and deliver cars. The quantity supplied for cars will decrease. If fewer cars are being supplied, then in order to consume the available gasoline, the average vehicle weight can be increased. This may explain why people are driving bigger and less fuel efficient cars.